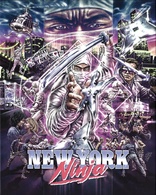 Vinegar vient de proposer ses sorties de mai en précommande : One of the most iconic and notorious exploitation films of the 70s, we are so excited to present the OFFICIAL worldwide 4K UHD and Blu-ray debut of Bo Arne Vibenius' THRILLER - A CRUEL PICTURE newly and exclusively restored in 4K from its original camera negative and presented fully uncut for the first time ever on home video! Plus, we're debuting THEY CALL HER ONE EYE - the official and original theatrical version of THRILLER, which features numerous alternate and extended sequences, including the long rumored Hot Dog Vendor cameo from director Bo Arne Vibenius! And, we've commissioned a brand new, 40+ min making-of documentary, along with loads of other new and archival bonus features. This is the ultimate THRILLER experience!

To celebrate our tenth year, we've revived our much loved Drive-In Collection, updating it from DVD to Blu and presenting the world Blu-ray debuts of two quintessential films from the heyday of outdoor cinemas: Larry N. Stouffer's HORROR HIGH and William Grefé's STANLEY! Not only are both sourced from stunning new 2K restorations, we're pleased to confirm that our edition of HORROR HIGH represents the world home video debut of its fully uncut, and extra gory, original version with numerous instances of long censored carnage now fully intact!

And finally hitting 4K UHD, we're delighted to bring you Y.K. Kim's MIAMI CONNECTION, newly restored from recently discovered negative elements along with its never-on-video original cut, ESCAPE FROM MIAMI, also newly restored from its negative! We've also worked overtime to put together a comprehensive assortment of extras, old and new to mark the 35th anniversary of this beloved gem!

One marks the worldwide BD debut of an long out of (legal) circulation gory, early 80s monster flick which we've painstakingly restored from its original 16mm negative and the other is a way-out staple of mid 80s cable TV and midnight movie marathons which joins the ranks of our other WTF milestones, and has also been freshly and exclusively restored from long lost negative elements!